Why is P&R so popular in York?

As I’ve mentioned on a few occasions on this blog, York boasts one of the most successful Park and Ride scheme of any city within the UK.  In recent publicity for the new Poppleton Bar site, the City Council brags that whilst most Park and Ride schemes require a Council subsidy, it actually receives a licence fee from First York in order to operate the services. So why is the York scheme so popular? Why is it something that is profitable in this reasonably small city, whilst in most cities the schemes fail to even break even? 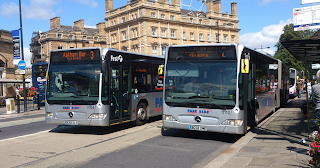 York currently has five Park and Ride sites dotted around the outskirts of the city. Askham Bar and McArthur Glen are at the South of the city, Monks Cross and Rawcliffe Bar are at the North whilst Grimston Bar is at the East. All are situated on, or close to main ‘A’ roads, and when the Poppleton Bar site opens in the next few months, every major road into the city will have a P&R site on, or near to its intersection with the outer ring road. This comprehensive coverage certainly makes it appealing to car drivers, in that they will inevitably have to drive past a site if they intend on heading into the City Centre. Compare this to Derby, where car drivers have to go a significant way into the city to get to a site, which is a relatively long way from the route they were taking. Finding the site is enough hassle before contemplating having to get the bus for the remainder of the journey. The multiple, well placed sites are a crucial part of the scheme’s success. 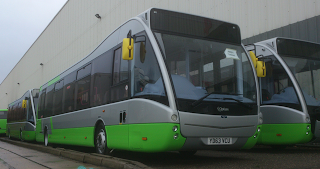 Another crucial factor is the horrendous congestion that occurs in York at the drop of a hat. The fact that a large proportion of the historic city walls remain to this day shows that whatever era York was designed for, it certainly wasn’t the current one. With regular queues in the city centre, combined with extortionate parking charges (York City Council raised £5 million through parking last year) makes the city centre an undesirable place to be if you’re a car driver. A family of four, with two adults and two under 16s can travel into York for just £5.40 after the fares go up tomorrow, which is a considerable saving on parking for large periods of time, not to mention any money saved on petrol. 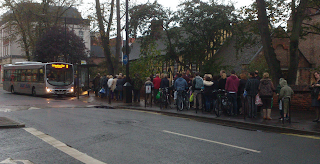 Once on-board, traffic becomes far less of an issue, with all routes into the city centre featuring bus priority systems. The new Poppleton Bar scheme includes nearly £4.5 million worth of investment into making sure the P&R buses have an easy route into town. Three out of the current five routes benefit from the city centre’s bus only roads, with the Rawcliffe Bar route recently benefiting from the conversion of the famous Lendal Bridge into a bus only road during the day. What this can often mean is that parking at a P&R site, waiting for a bus and then going into the city centre can be quicker than driving in yourself. That’s before the time and patience that has to go into finding a parking space. For many people, using the Park and Ride is a logical choice. 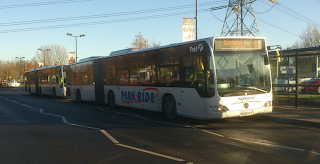 Grimston Bar is one of the busiest sites, and is popular from visitors from Hull and the East Coast

Finally, having a smart, dedicated fleet of buses makes a massive difference. It’s not a description that you would usually attribute to a First bus, but thee fleet is well turned out in a tasteful silver livery. There’s a generous contingency within the P&R fleet too, which makes a standard liveried bus a rarity. The new Versa EVs due would suggest that a variation of the First corporate livery could be coming to the P&R fleet, but it will no doubt retain the prestige the current one offers. Going back to my ‘bad’ example of Derby, this isn’t the case on the Northern D1 P&R. Today’s offering was two Optare Excels, one in Unibus livery and one in College bus livery. The branded bus was withdrawn quite some time ago. Many P&R users may be tourists, or people unfamiliar with the area and a dedicated, easily recognisable bus is a must. This is something that York does well, which will no doubt be a contributing factor towards its success. 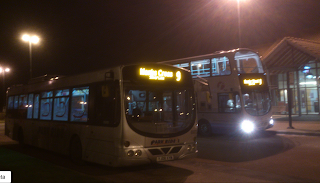 It does happen every now and again! A stray First branded Gemini has a run out on the Monks Cross service

So it is without a doubt that York’s P&R scheme is one that should be looked at for best practice. It carries some 4 million passengers every single year; an astonishing figure. And it certainly isn’t a novelty. Demand has outgrown supply; extra capacity is clearly needed by the new Poppleton Bar site. Furthermore, the Askham Bar route is to move to a new, larger car park to keep up with demand, given that the site often fills up by mid-morning. Four million passengers is somewhere near 1 million cars of the city centre’s streets, creating a more pleasant, safer and greener environment for people to enjoy. It is a scheme that could and should be replicated in many major cities, and is solid proof that bus travel is not a thing of the past; it can play a crucial part in developing a more sustainable future.

All the photos on this post are once again courtesy of Chris Nelson on flickr.
Posted by Oneman at 15:52