The importance of social media in the industry is well known. The vast majority of bus companies now have either a twitter or Facebook account, or indeed both. They’re tools that allow companies to connect with their customers instantly, to let them know of delays, changes to services or competitions. People connect with the companies to let them know of delays to their journeys and in doing so become a captive audience for promotion of offers and new and improved services.


They also offer a new channel for raising complaints, and in a public manor never seen before. People can raise grievances that are public to everybody who comes upon them, as opposed to the far more private methods such as emails or over the phone. The response to these complaints is equally as public, and a non-response, or encouragement to sort the problem via another method, away from prying eyes, can often be more telling than the complaint itself. As ever, Trent Barton, who feature in the national top 100 league table for social media use, seem to do a particularly good job with regards to complaint tweets, apologising for and explaining the issue, letting customers know what action is to be taken (where relevant) and pointing the unhappy customer to the money back guarantee. The originally unhappy customer is suddenly reassured and is more likely to travel again- the perfect outcome. 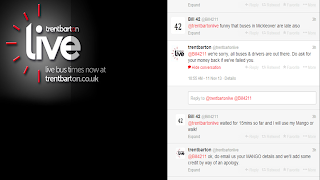 But Trent Barton are by no means the only operator to make good use of Twitter. Their rival, Yourbus, doesn’t receive the same volume of tweets as their older competitor but the ones that they do receive are handled very well. Also in the East Midlands, Nottingham City Transport make very good use of their twitter account, as do Wellglade’s smaller subsidiary, Kinchbus. Many of these also portray themselves as friendly, personable companies with the odd anecdotal tweet, which works to good effect (which no doubt Innocent Smoothies, the ‘king’ of social media, would swear by). 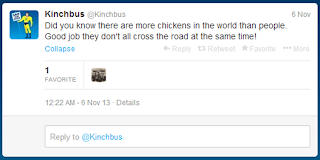 Kinchbus showing that they have a humorous side!
However, I must say that this evening I have been more than impressed by East Yorkshire’s twitter service. Not only was my response thorough and particularly helpful, it also came through minutes after my question, which was made at nine thirty at night. The journey for which I enquired was one I can make with either EYMS or First York and I posed the same question to both companies regarding fares, and I must admit I got a very good response from First as well. 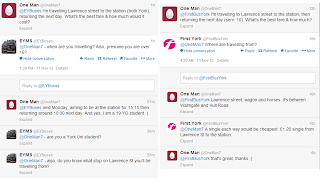 That’s exactly why sites like twitter are so powerful. As a customer, or indeed potential customer, I can get the information that I need in a matter of minutes, rather than having to trawl through websites or timetable books to get the information. When something goes wrong, twitter can be there for me to find out information, or let the company know how I feel. It is a fantastic tool for the industry, and it is reassuring to see how well it is being embraced up and down the country.
Posted by Oneman at 14:53