Buses are, without a doubt, crucial to the economy of the United Kingdom. Every single day, over half of all journeys made by public transport are made by bus, transporting the workforce to the workplace and the shoppers to the shops. Despite a huge increase in car ownership over the past few decades, there still remains a significant percentage who do not own a car, or who would rather eliminate the often extortionate cost of parking and end up on the bus. Without these people, the UK’s already flagging High Street would take a big hit.


A total elimination of bus users is, of course, unlikely. What is perfectly possible, however, is a significant reduction in the number of bus users hitting the High Street. It is a perfectly foreseeable result in the town of Loughborough, if council plans are to go ahead. With the road system being totally redesigned, Loughborough’s Market Place would be totally off limits to cars. The question is, however, whether or not buses should be allowed to continue to use it. These buses currently drop off passengers on the street, at stops convenient for the town centre.


The council is currently in a public consultation process, before making an ultimate decision. One of three outcomes will be decided, a total ban of buses down the road, or allowing buses to travel either in one or both directions. The notion of buses running down pedestrianized roads may seem like a bizarre concept, yet it is one that happens up and down the country. It can be seen in the East Midlands already, in both Belper and West Bridgeford. 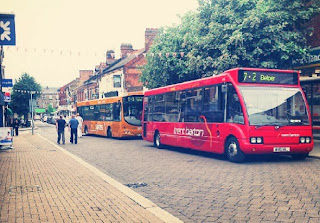 Buses and pedestrians coexist quite happily in Belper
﻿
One of the main companies that could potentially be impacted by the change is Kinchbus. They are THE Loughborough bus company, linking the town with its suburbs and the major cities. Their customers no doubt make up a considerable percentage of the people spending their money in the town centre, and Tom Morgan, their General Manager is not happy about the notion of not being able to drop off in the current locations. 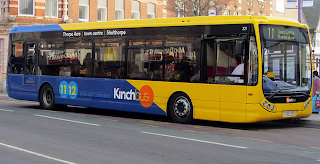 He fears that “If Loughborough is difficult to get too, people will find other places to go. Ilkeston buses were pushed outside and folk go to Derby now. It is almost ghostly.” He is firmly in favour of buses and pedestrians sharing the road, boldly stating in an Action for a Better Charnwood meeting “It’s a good, strong idea. It is not something that is new to the UK. It is proven to work.”


We’re supposedly in an environmentally conscience time. Bus travel is capable of taking hundreds of cars off the road, and with green and hybrid technology being developed constantly, the buses themselves are becoming more eco-friendly. Surely then, our Government, at local and national level, should be encouraging people to use the bus? Yet, looking at the situation in Liverpool, where all the city’s bus lanes face closure, and now the situation in Loughborough, it does seem like a backwards step is being taken. 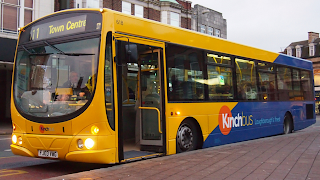 Bus travel is not a nostalgic thing of the past. It is crucial to our success in the future, and if helped in the right direction, it can be a thing for good. Councils really should be doing everything they can to promote bus travel, and that includes making it a more attractive option. Bus priority measures are a fantastic way of doing this, and they should be implemented wherever possible.


So, my opinion is very clear with regards to Loughborough. Complete access in both directions for buses. Agree with me? Then why not let your voice be heard. Fill in the consultation survey here.
Photos from Matt Burley
Posted by Oneman at 15:05