Efficient use of space

It seems that using a different browser has part-solved the issue. Apologies for the lack of updates, and the perhaps diminished relevance the post now has. Nonetheless, I hope you enjoy, and please feel free to give comments and feedback!

Route branding is something that we have all become far more used to in recent years. It is something that Yourbus, NCT, Trent Barton, Arriva, Kinchbus and Notts and Derby use in Nottingham and Derby to promote their routes. But the extent to which it is utilised by Trent Barton is unparalleled across the country. Since 2003 they have ripped up the rule book, doing away with a standard livery and route numbers, with the introduction of different coloured buses and routes being known by names.

Of course, prior to 2003, brands were used by Trent and Barton. But these were often standard livery with a few stickers over the top, the exception being the ‘Rainbow’ routes. That’s a far cry from the situation today, where everything, from the exterior paintjob to the colour of the headrests, is in line with that route’s brand. 2003 was also the year that the standard Trent Barton livery was unveiled. This would be on show on routes that weren’t branded (of which there were far more at the time) and on the spare buses that would fill in for the ones ‘on brand.’ There was the odd exception, the migraine inducing frio livery, carried by three buses, and another livery promoting the zigzag ticket. The latter survived until very recently. 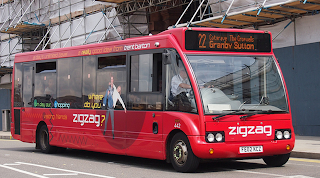 Four buses were restyled to promote the then new Mango smartcard, with a bus allocated to each depot. Between them, they travelled across almost every route, through almost every settlement, acting as free billboards for the product. What a great idea. People across the East Midlands are used to having different looking Trent Barton buses driving around the place, a few more couldn’t hurt, could it? Especially when they are promoting various aspects of the company. 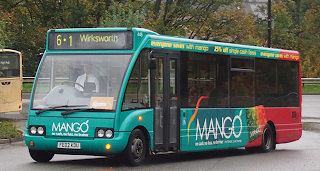 Then, it appears a decision was made. Scania Wrightbus Solars had replaced a number of Excels on the Skyline 199, and a number were destined to be spares elsewhere in the fleet. Of these, two reappeared in the ‘mum bus’ livery, declaring Trent Barton’s attitude that their staff should treat their customers the same way that they’d treat their mum. It became a talking point, I heard plenty of discussion about one of them when it was allocated to the Ashbourne services, thus showing that they are great publicity, they get the message across and they get people talking. 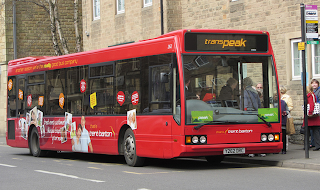 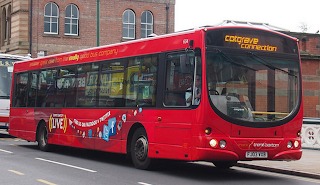 Not long after, the new style of branding was introduced. Unlike in 2003, a standard livery wasn’t the first to be revealed, it was the i4 livery. Nor was it the second, or indeed the third. In fact, 18 months later and there still isn’t a standard livery, and it’s unlikely that there will be. There’s currently 20 buses in the new style that are part of the spare fleet. Eclipse 727 was the first bus out of the paintshop in the new livery, and it was one promoting Mango. It was later joined by Solo SR 500 in the same livery. It was clear from the offset that it would be promotional liveries for the spare fleet, not a standard one.

Whilst there isn’t a standard livery, there does appear to be a standard colour and style to the new style spares. There was much anticipation about what some of the former Rainbow 4 Wrightbus Solars would look like when they came out of the paintshop, but it’s fair to say that they looked very good, both inside and out. Solars 676 and 680 were the first two out, promoting the Trent Barton live social media and the zigzag ticket respectively. They were later joined at Nottingham by a third, telling passers-by about what customers thought about their service. They said great things, so why not shout about them? Gradually, all thirteen of the Solars appeared in these liveries. 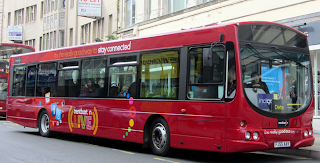 The best looking spare in the fleet has to be Volvo 724. In a unique gold livery, it really stands out as it drives around the East Midlands. Whilst being 100 years old is nothing to promote in itself, the motto of “really good, really local, really proud” says a lot. It also symbolises everything that the company has achieved over the past 100 years, not to mention the fact that it is this year supporting a very good charity, the Lewis Mighty fund.

Now, there’s a new player in the team. Following the changes on Indigo, with fewer buses required it was time for Volvo 723 to get a new look. In less than a week, it was transformed from purple to crimson red, in a new livery promoting a new product. That product was, of course, the new Trent Barton live, offering live bus departures for every stop. It’s a very smart, eye catching livery, that promotes a product that would appeal to car users, no one enjoys standing round waiting for the bus. 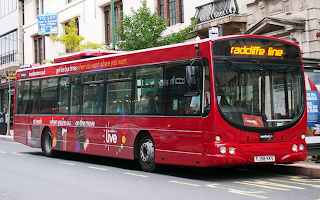 It’s therefore fitting that the latest addition goes back to the original point, should the spare fleet be in a uniform livery, or could the space be better utilised promoting the array of products offered? The answer to me seems simple. It’s easy to be nostalgic, and hark back to a day where all buses were in the same livery, but that’s no longer the case. Bus companies are businesses, and the more people on their buses the better. There’s no better place to advertise than on the buses themselves, so, in my opinion, Trent Barton’s rather bold and unique step to do so is commendable, and seemingly very successful.
The photos are again courtesy of Matt Burley.
Posted by Oneman at 14:16