We are, aren't we? It's the small things in life that please us, it's the simple things that make something so much better. Whilst branded by some as nothing more than 'gimmicks', small touches made by bus companies to either improve a particular service or indeed their own image can make a huge difference. It's something that the award winning companies use incredibly successfully; the introduction of free wifi, a money back guarantee, live bus times. All things that make the journey better for the customer, all things that inform their decision as to whether they travel with the company again (if they're fortunate to have another choice).

So if we can be so easily swayed by the small things, it goes to show that a large proportion of customers can be persuaded to either use or not use a company by practically anything, or indeed anyone. Last year, in York, First suffered terribly after the University's Student Union discouraged students from using their '4' service. There was also a lot of uproar about their decision to not serve the Heslington East campus. They became "public enemy number 1" and the loadings were poor. Fast forward 12 months, and they're again serving the Eastern campus. There's less discouragement and people are once again using the service, with double deckers now being a common sight. The whole image of First was significantly damaged, because of the word of others and general dissatisfaction at their decision. The result of the damage to the image was damage to one of the company's key routes. 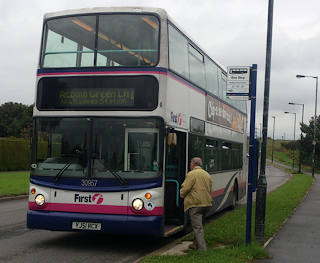 This concept also works both ways, Whilst decisions can lead to uproar and unhappiness from customers, noticeable gestures are likely to win some favour from both customers and potential customers. And once such favour and custom is earned, it can be easy to retain. That appears to be the motive behind Yourbus' latest venture. This week is the Ilkeston fair, taking place in the town centre. Yourbus are running a half-hourly shuttle between the town centre and Cotmanhay, the previously Trent Barton dominated estate which now forms the terminus of the Y3 service. The service is entirely free, uses one bus and runs from 6:30 to 10:30 in the evening.

This is a simple yet potentially clever move by Yourbus. It is a gesture that will be remembered, and it also gets people to try a member of Yourbus' fleet. These are buses that don't exactly live up to the stereotypes of old, tried and dirty buses, instead, the vast majority of the fleet is less than a year old. No doubt leaflets will be strategically placed inside the bus too to ensure people are aware of the Y3 service (and indeed other services in the area). Having tried the service for free, they may be more inclined to pay for the same route in the future (the Y3 vies for trade with Trent Barton's "The Two" on the way into town) or indeed even further, into Derby. 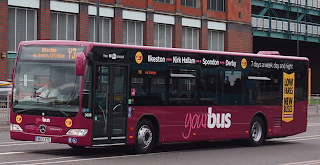 Suddenly, Yourbus become the friendly, generous company amongst the good people of Ilkeston. It is a very clever piece of promotion, and one that could change the mindsets of a great few people. We shall see if anything is to come of it...

See more of Matt's and Chris' photos
Posted by Oneman at 16:04