Developments in the East Midlands

Yourbus’ attack on trent barton is somewhat high profile. For those unfamiliar with the situation, I will give a brief summary: 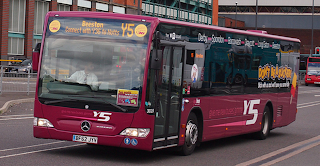 Y5 is the second route Yourbus introduced in direct competition with Trent Barton.

So, as you can tell, the whole affair is getting a little nasty. And it doesn't show any signs of stopping. A number of developments are imminent.

·         Yourbus are taking over the running of the 109, which they will renumber the 114. This links Derby and Ashbourne via an indirect route but, along with the 113 which they have also won, will nicely compliment their Ashbourne network, with them already running the 110 and 111 services. The 114 contract involves a journey along the Swift route first thing in the morning and you have to question whether this is all part of a plan to launch an attack on Trent’s first route. Swift is becoming somewhat notorious for overcrowding and a detour around an estate upon leaving Ashbourne could be avoided by Yourbus but Trent Barton would no doubt face a PR backlash if they did the same.

·         The Y5 will be ran through to Nottingham (Friar Lane) from the 27th October. During peak hours, this will be a continuation of the current service from Beeston, following the Indigo route. Outside of the morning and evening rush hour, the service will follow the faster Skylink route into town. This comes not long after Trent Barton have reduced their service along the corridor from Skylink buses every 15 minutes to 3 irregularly timed buses, two on skylink (running 30 minutes apart) and one on the new Sawley Xprss. 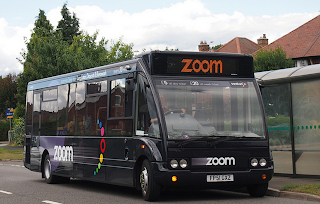 Zoom provides faster journeys along the corridor served by Y5

·         The Y3 will extend from Ilkeston to Cotmanhay. This is a large estate currently served by a number of Trent Barton routes, principally the Two and the 23. There isn’t, however a direct link to Derby and I’ve often seen people transferring from the 23 onto the Ilkeston flyer.  This could be a niche that works for Yourbus, but from what I saw yesterday, loadings weren’t great and I doubt that custom from that estate alone can keep the service going, particularly when there is a link to Nottingham, a bigger and arguably better, shopping destination, every 12 minutes. Furthermore, I noticed a 21 branded tempo advertising a £3.40 Ilkeston all day ticket yesterday. 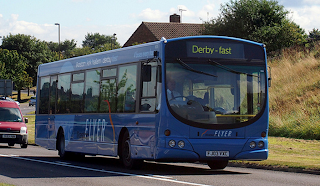 635 has been drafted in to allow a 4 bus an hour frequency on the Ilkeston flyer,
following the introduction of the Y3

Yourbus certainly don’t seem to be throwing in the towel just yet then. They are a very fierce competitor who has had both success and failure in the past. Those that are benefiting are the passengers, many of whom have received faster, cheaper or more frequent buses, even if they’ve stayed with Trent Barton.  Only time will tell if these latest ventures pay off for them.

The photos included in this post are all (c) Matt Burley. Find his photos online here.