It’s a well known fact that Indigo is one of Trent Barton’s most successful and thus profitable routes. With a historic frequency of every 6-7 minutes it’s also their most frequent. A staggering 9 travel between Nottingham, Beeston and Long Eaton, from where buses continue to Briar Gate and Derby every 20 minutes. Old and New Sawley are served hourly and half-hourly respectively. Very few people would use it to travel from Derby to Nottingham, there are much quicker options, but it is a route that connects a lot of places and that is no doubt where its successes lie. 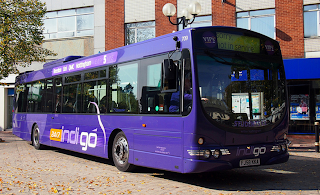 It’s only been known as Indigo since 2008. Prior to that, it was known as Rainbow 5. The flyer below shows a somewhat different approach to branding to what is currently applied, but shows a somewhat different route. The Rainbow 5 itself was a three-bus-an-hour affair, what is currently the Derby leg. It was supplemented by the 5A (the Briar Gate leg) and 5B (extensions to New Sawley, Old Sawley and Loughborough) to form a ‘super-route’ into Nottingham. These were operated at the time by a mix of ‘S’ and ‘X’ plate Optare Excels, the last of which (234) has only just been withdrawn from the fleet.

From the archives, this 2002 promotional material

Rainbow 5 was the first route to gain Scania/Wrightbus Solars and was also the first route to gain the new Stenning designed Trent Barton identity in 2003. The ‘A’ and ‘B’ were done away with, with buses simply displaying ‘5’ and their destination. In 2008, the route was the first to receive Volvo Wirghtbus Eclipses. After much delay, resulting in the fleet being re-registered as ‘58’ plates, they entered service, giving the new route and a touch of class; featuring leather seats, air conditioning and wood laminate flooring. After a successful trial on Rainbow 4 (now i4) and Commuter Xprss (now Club Class), Indigo was the first to receive technology to allow the use of the Mango smartcard.

A total of 25 Eclipses were delivered for Indigo, making it the route with the biggest number of allocated buses. In 2011, Indigo became the first commercial route in the East Midlands to run 24 hours a day, seven days a week. The Eclipses were given subtle branding changes, with orange “24/7” stickers being applied.
The biggest change for quite some time came in early 2012. Trent Barton took over the Nottingham Skylink, previously ran by Nottingham City Transport. Rather than via the previous route, it would run fast to Long Eaton before heading to the airport and onto Loughborough every other journey. This essentially consolidated the two Nottingham to East Midlands Airport services into one, and as such would replace the Loughborough leg of Indigo. As a result, New Sawley saw their service doubled and two vehicles were taken off Indigo. One of these is now the famous centenary bus seen around ‘Trent Barton land.’ 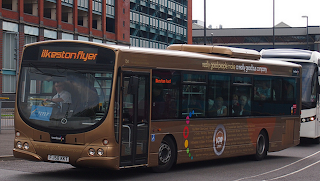 This former Indigo bus is now the pride of the fleet

From today, the biggest change to Indigo will take place. The whole timetable has been torn apart, travel trends have been examined and a whole new offering is about to be unleashed. Buses will now run every five minutes between Nottingham, the QMC, the University and Beeston. Offering a £1 cash fare, Indigo is now a particularly attractive service to students and a real contender in the heavily fought corridor.
Buses will continue to Long Eaton every 10 minutes during the day, with there being a 5 minute frequency at peak times. Of these, half will continue to Derby (alongside the new Zoom) and the other half will continue to Briar Gate. 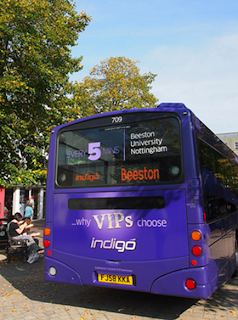 Just in case there was any doubt as to the new frequency...

With the exception of a few peak time journeys, Indigo will no longer serve Sawley. Instead, a new Sawley Xprss service will run, every hour, from Nottingham fast to Long Eaton, before serving both Old and New Sawley. This service will be ran by Optare Solos, the dedicated two having been painted into the newest incarnation of the Mango livery. 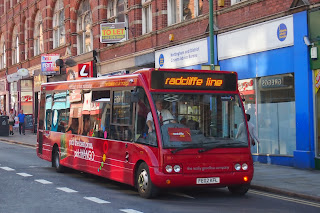 These are massive changes and aren't ones made without a lot of thought and investigation. Indigo always has and no doubt will continue to be a fantastic and popular product and a complete re-think will no doubt result in the service being even stronger into the future. I wish Barry, as Indigo manager, and all the team all the best of luck with the new and improved Indigo.

All photos are once again courtesy of Matt Burley